At eSF we are are troubled by how conservation efforts have become a mere number game while the real quality of our biodiversity has depleted. Mere increase in numbers of species cause a sense of jubilation and this success in conservation efforts is met with much fanfare. But is this an actual success or a mere illusion?

The tiger population in India increased by 815 from 2006 to 2014. The number of lions increased from 180 in the late 1960s to over 600 according to an unofficial census in 2018. India now has the second largest population of elephants across the world as the tally went up to about 27,000 wild elephants.

Why these numbers are an illusion ?

According to the Ministry of Environment and Forest, 19 lakh hectares or 2.47% of total recorded forest area is today under encroachment by humans. Current conservation efforts tie animals to ‘protected areas’ and we take pride in our achievement but we have shrunk the very land under their feet and depleted the resources necessary for their survival. We have six-lane highways cutting through the famous Kanha-Pench reserve which houses 10% of the world’s tiger population. Between 2009 and 2017, 120 elephants have been killed on railway crossings alone, and leopard and human conflict incidents are being reported on a daily basis.

Due to the dearth of land and resources, animals have started migrating out of their protected areas, planning of which was unscientific, to begin with. The national tiger conservation authority explains that one male tiger requires an area of about 60-100 sq km. Yet, many tiger reserves like the Bor tiger reserve in Maharashtra have a population of 15-24 tigers in an area of 121-134 square km. Most tiger reserves in India have either exceeded their carrying capacity or are on the verge of it. Elephants who need to move approximately 10-20 kilometres in a day, have a total protected area of only 18,732.6 square kilometres shared among 27,000 of them.

Protected but not safe

The Saryu stretch is home to the endangered Gangetic Dolphin and the critically endangered Gharial, but due to the neglect of species outside of protected areas, these majestic animals are either openly poached or caught in fishing nets and thus subjected to painful deaths. The Gangetic Dolphin is almost a 100% outside of Protected Areas. 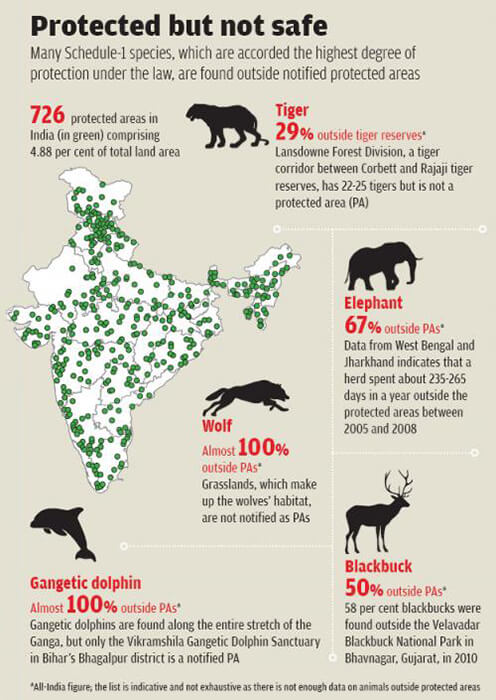 Did you know that over 30% lions in Serengeti in 1994 died because they caught canine distemper from stray dogs in human inhabited areas? This was because they were forced into shrinking “protected areas” with shrinking prey base and starvation forced them to enter into human inhabited territories. Such forced enclosures also create genetic bottlenecks leading to offsprings with health disorders. 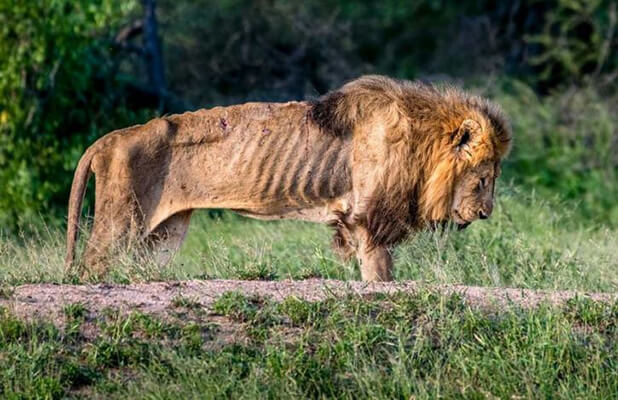 Such factors are being repeated in Gir, and Gir’s unscientific conservation threatens to wipe out the entire lion population in no time, rendering decades of conservation efforts futile.

The solution to these problems are Forrest Corridors.These stretches of lush, continuous, holistic tree cover will prevent scattered 708,273 square kilometres of forest area from becoming scattered and lost in the sea of humanity. It is forest corridors that will facilitate the free movement of animals in search food, water or mate and ensure that our biodiversity wealth remains safe.

The condition of non megafauna species like Nilgai or the blue bull, the wild boar and the rhesus monkeys is dismal. The reason stands the same- strain and continuous encroachment on the habitat of these animals, and ironically we have titled them as ‘pests’! Probably the most misconceived predator is the wolf. The man-animal conflict in the case of wolves is extremely high as the shrinking forest cover is compelling wolves to prey on cattle. The grasslands which the wolves traditionally inhabit are getting devoid of tree cover, which in turn leads to the disappearance of herbivores. This also results in the declaration of these areas as wastelands by the authorities which in turn affects the conservation status of these animals negatively.

India currently faces the curse of a ‘Normalcy Bias’ among the general population. We plant 10 trees, have enthused discussions in the comfort of our air-conditioned living rooms and visit an animal shelter at the end of the week and think that we have done our part. Nothing could be farther from the truth. 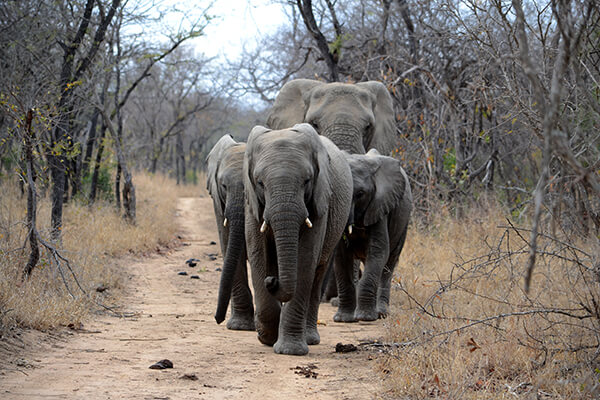 This complacent attitude, the habit of turning a blind eye and unquestioning acceptance of all practices that are costing the planet massive ecological damage that threatens human survival too. When it comes to climate change or environmental degradation, there are two responsivists: One, who completely deny climate change or any such phenomenon. It is these people who are allied with oil lobbies, big mining corporations that actually integrate the rest of the world by providing a face to the common antagonist. Second, are the armchair activists who commit the actual foul against the spirit of conservation.

eArth Samvarta Foundation recommends a three-pronged approach towards dealing with the issues wildlife and forest cover conservation in its Sanrakshan Initiative:

eSF aims to create a dynamic repertoire in the field of animal welfare and wildlife conservation through its initiatives and programs, providing a voice and executive assistance to passionate leaders in conservation who are willing to get down in the mud, so that all our hands could be free of innocent blood.